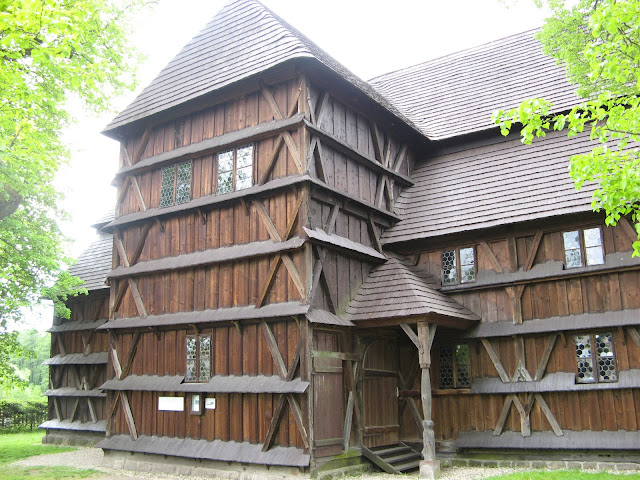 This beautiful church is located in the village of Hronsek, halfway between the cities of Zvolen and Banská Bystrica in the central region of Slovakia. The most unique feature in the building's design is the clear influence of Scandinavian architectural styles, making it the only church in the country to exhibit such characteristics. 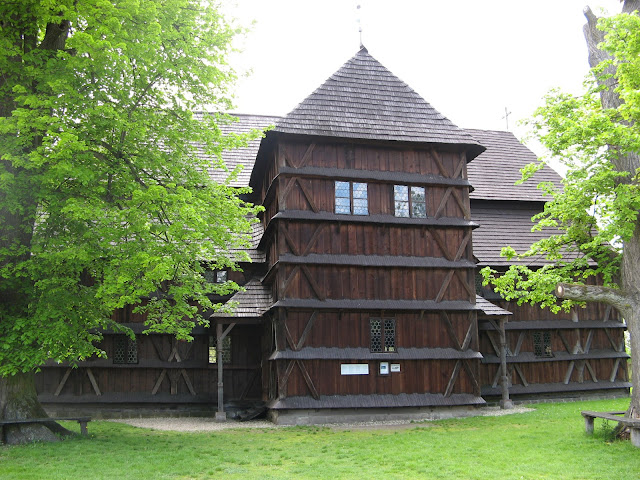 As a protestant church built in the pro-Catholic Austro-Hungarian empire in the early 18th century, it had to be built according to very specific guidelines. In 1681 the Assembly of Sopron had declared that protestant churches had to be constructed according to these strict criteria:
1. The church had to be built in less than one year's time
2. The entire church had to be constructed only of wood, without a single iron nail
3. The church could not have a bell tower (to ensure Catholic churches were more prominent)
4. Entrances to the church could not be made directly from a street
5. The church must be built outside of town and village boundaries. 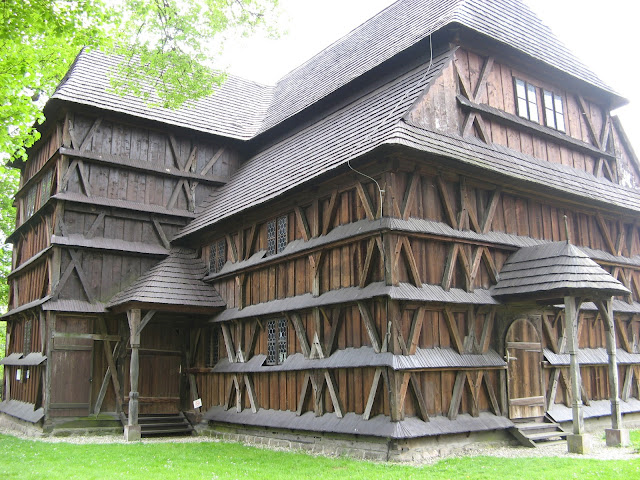 At this time the Habsburg authorities were doing everything they could to reduce the durability and permanence of Protestant churches, and local officials often tightened the Sopron regulations even further. Hronsek was chosen as the site of a church for the protestant congregations in the northern part of the city of Zvolen and in the surrounding villages. Since just two protestant churches could be built in each region, the churches had to be very large to accommodate many worshippers who would travel long distances to attend services. 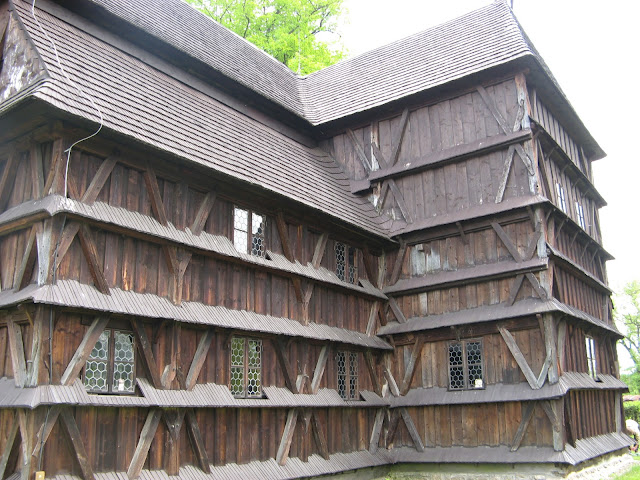 Construction of the Hronsek church began in October 1725 on an island in the middle of the river Hron, and the project was completed the following autumn. The architect who created the design is unknown, hence there is much speculation about how the Norwegian and Swedish design elements came to be incorporated into the structure. The connection technique for joining the wooden beams and the arrangement of the interior columns are regarded as examples of this northern style influence. 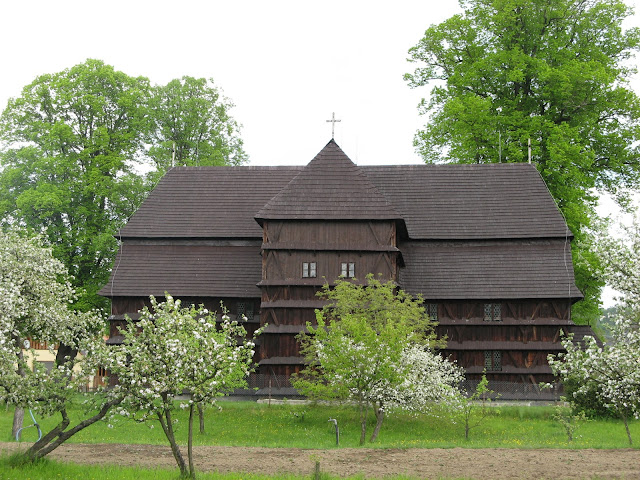 The church was built to seat 1100 worshippers, both on ground floor pews and on four upper balconies. The seats are angled so that every person in attendance can see the altar clearly. Five different doors allow the building to be filled and emptied more quickly. The interior contains six altar pieces from 1771 which are changed according to the feasts of the ecclesiastical year. The ornate organ was built in 1764 by a local master tradesman from Banská Bystrica. 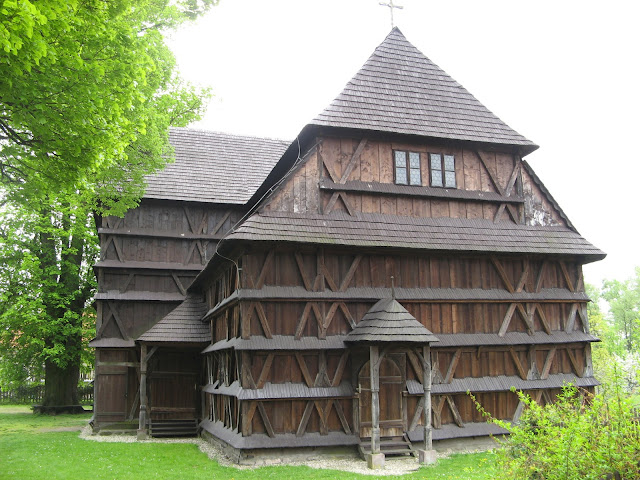 A 19th-century wooden chandelier hangs from the ceiling in the centre, and the main altar uses wood to recreate the look of marble stone. The interior is illuminated by 30 blown-glass windows in the shape of hexagons which provide plenty of natural light. The central dome of the ceiling has the appearance of the keel of an old sailing ship. The walls were built of red spruce and oak wood with beeswax coating added for durability, and the same wood has survived without replacement until modern times. 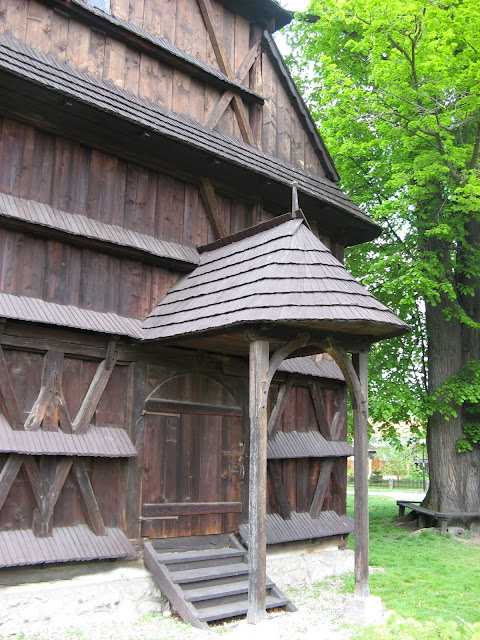 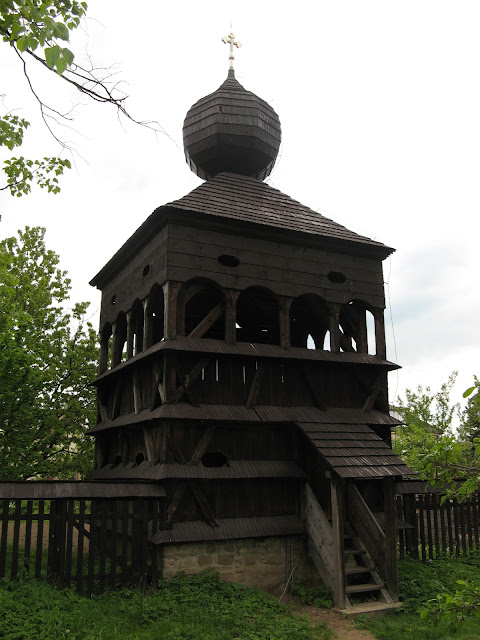 The church is used for occasional services, concerts and weddings, but if you arrive and find that it is locked the key is available from the family who live in the house next door. The village of Hronsek is on the local train line between Zvolen and Banská Bystrica, and is also connected by bus with both cities.
Posted by Goulash Train at 7:44 AM

Goulash Train
This blog is based on my personal travel experiences while living and working in Slovakia, Poland, Russia and the Czech Republic for ten years. I have a particular interest in the folk culture and wooden architecture of the Carpathian mountains. Eastern Slovakia and Ukraine's Zakarpattya region are my favourite places to explore - I'm familiar with these regions on a village by village level.

See My Other Blog Dedicated to Central and East European Travel: